Another example of what to a UK citizen with the NHS of the horrific consequences of the US health system.

We have a friend with a house in Florida who last year, when on holiday there, caught his finger in his garage door up-and-over. He went to his local hospital but because he had broken the skin and was bleeding as well as having broken his finger, he was not able to be treated there. He was therefore transported for 4 hours across Florida by private ambulance to a hospital where he was anaesthetised and operated on – they felt they could not stitch up this (minor) laceration without putting him to sleep and using an operating theatre. In the UK they would have done all of this in the Accident and Emergency Dept – which can stitch under local anaesthetic! Anyway, this then resulted in our friend staying over-night. Given drugs and a bill of $40,000! Just for a broken and slightly lacerated finger… he is still quivering at the size of the bill.

So cancer treatments become horrendously expensive and members of the family resort to all sorts to pay the bills. Of course. Here it seems they resort to flying with very dodgy characters into very dodgy areas of the world to undertake very dodgy missions.

High Altitude refers to the height of planes – jets – as they fly over mountains of course, but also the risks that are taken when you don’t know quite what you have let yourself into.

Not being an expert on flying I relied on the author for accuracy here and as a  former stewardess or flight attendant I am happy to assume that she was correct.

Now as for the style of dress worn, the Salwar Kameez is a traditional Indian outfit, which I love – and actually have a set of – bought in Bangladesh. But technically the Churidar Pyjamies are the leggings – or tight trousers that are worn under the dress part. The name Churidar comes from the fact that these leggings are long, tight and intended to fold into wrinkles at the ankle, thus looking like churis or bracelets – see photo. With a salwar, the leggings are looser at the ankle. In fact, on my first visit to India I wanted to get some white cotton trousers as I thought they would be very cool, and discovered to my surprise, and the amusement of the shop assistants, that white are only worn by men and yes, are called pyjamas or pyjamies. So now we know where our ‘English’ word comes from! And also, if you wanted to buy them off the peg, you couldn’t buy women’s clothing anyway, as in India they were all made to measure. So mens’ white cotton trousers with a string waist pull cord it was – and my own salwar kameez also has a pull cord on the leggings part.

The Pashtun warriors mentioned are often fairer of skin as they may be descended from Iranian tribes, or some would also argue, from the offspring of Alexander’s men who stayed in India rather travel all the way back to Greece! Some also argue that they originate from the 12th Tribe of Israel, that was one of lost Tribes. They are certainly Caucasian and more Mediterranean in skin colour and feature. The tribes of the Pashtuns or Pathans traditionally originate from the Pakistan/Afghanistan borders – the high mountains. They are well known for their fierce demeanour and warrior/fighting skills. As well as sporting. They are of course, traditionally Muslim in religion, of the Sunni variant being converted around the 8th century, although some also argue that they were always followers of Mohammed and are descended from his original disciples. They are identified through 4 tribal confederacies: Bettani – ‎Ghurghakhti – ‎Karlani – ‎Sarbani; and are largely communal in culture as so many nomadic cultures are. They attach great importance to an unwritten code, called Pashtunwalli. This code defines the way members should behave to keep the tribe together. Hospitality (milmastia) is important, as is the use of the tribal council (jirga) to resolve conflicts and make decisions. Other Pashtun virtues include courage (tureh); taking revenge (badal); and protecting one’s honor (ghayrat). Another part of the Pashtun code of conduct is nanawati, a way of resolving differences through the group’s elders. [http://www.everyculture.com/wc/Afghanistan-to-Bosnia-Herzegovina/Pashtun.html#ixzz3WQqZvsvt]. It also true that Pashtuns are an integral part of the Taliban fighting force.

The interesting story that the characters wove about assessing needs for a school being funded by a private US philanthropist, is clearly a reference back to Greg Mortenson and his mission to create schools in this border area [see his book Three Cups of Tea, reviewed on this blog on 9th July 2013].

As always I am interested to research any flowers or native trees mentioned, so  the Kachnar tree is really Phanera variegate and  is a species of flowering plant in the family Fabaceae, native to South Asia and Southeast Asia, from southern China, Burma, India, Nepal, Pakistan and Sri Lanka. The common names include orchid tree, camel’s foot tree, kachnar and mountain-ebony. Whilst often having white flowers, it can also have variations of pink from light to dark flowers – as in the photos. 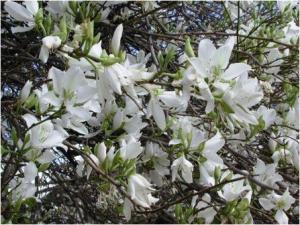 So back to the overall story. Whilst rather fanciful, it does follow and does make sense logically and has some good suspense aspects. The romance is not played up too much but exists in the background.  Overall I would give it 3.75 stars.

There are currently no comments.

This site uses Akismet to reduce spam. Learn how your comment data is processed.